Australian’s are crazy about Beetroot

Underappreciated by the rest of the world, the simple beetroot is loved by Australians. But why? Since when did beets on burgers become the Australian way?

As strange as it might sound, burgers, let alone beetroot on burgers is a relatively new addition to the Australian diet. Burgers came as a byproduct of the blossoming relationship with American troops post-World War I in the 1930s. Then not until the 1940s was it believed that beetroot made its appearance on burgers as part of a prank on US troops. 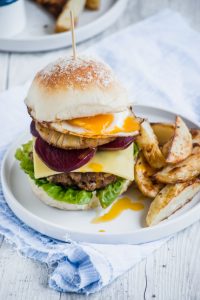 Since then the sign of a great hamburger is a beetroot stained wrapper, or better yet, purple juice dripping down your hand. During the 1950s and 60s beetroot became a staple part of the Australian diet before McDonalds cemented its place between a top a burger patty by bringing out the “All Australian” burger in the 70s.

Nowadays, if you pass up beetroot on your burger, you are sure to find a few Australians giving you a strange look. But beetroot isn’t just for burgers, now it is rare to find a restaurant menu in Australia without beetroot as a main feature. 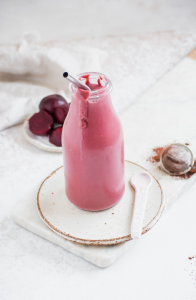 Beetroots are an incredibly versatile vegetable from raw to roasted, boiled, pureed or thinly sliced on a sandwich. The earthy sweetness that beetroot provides to a dish makes it perfect for salads or even to add a moist sweetness to cake.  Some other favourite ways that Australians enjoy beetroot are:

While becoming the unofficial symbol of ‘Australianism’ has raised the profile of the simple beetroot, their health benefits is what has maintained their rise to stardom. Beetroot has been crowned a ‘superfood’, amongst the likes of kale and blueberries, due to its high levels of antioxidants, which give them their rich purple colour. Beetroots are also an excellent source of iron, fibre, vitamin A, C and a range of B vitamins.

So don’t forget to add beets to your next burger, salad, soup, pasta, smoothie or any other meal for an added boost of nutrients and a beautiful pink hue. Pick up a packet of Love Beets from your local supermarket or greengrocer.

How to Build a Balanced Plate

Maintaining Food Safety Once You Have Left the Grocery Store

What is Driving the Convenience Shopper?

How to keep your leafy greens fresh

How to take your lunch salad to the next level!

The Benefits & Nutritional Value of Spinach!